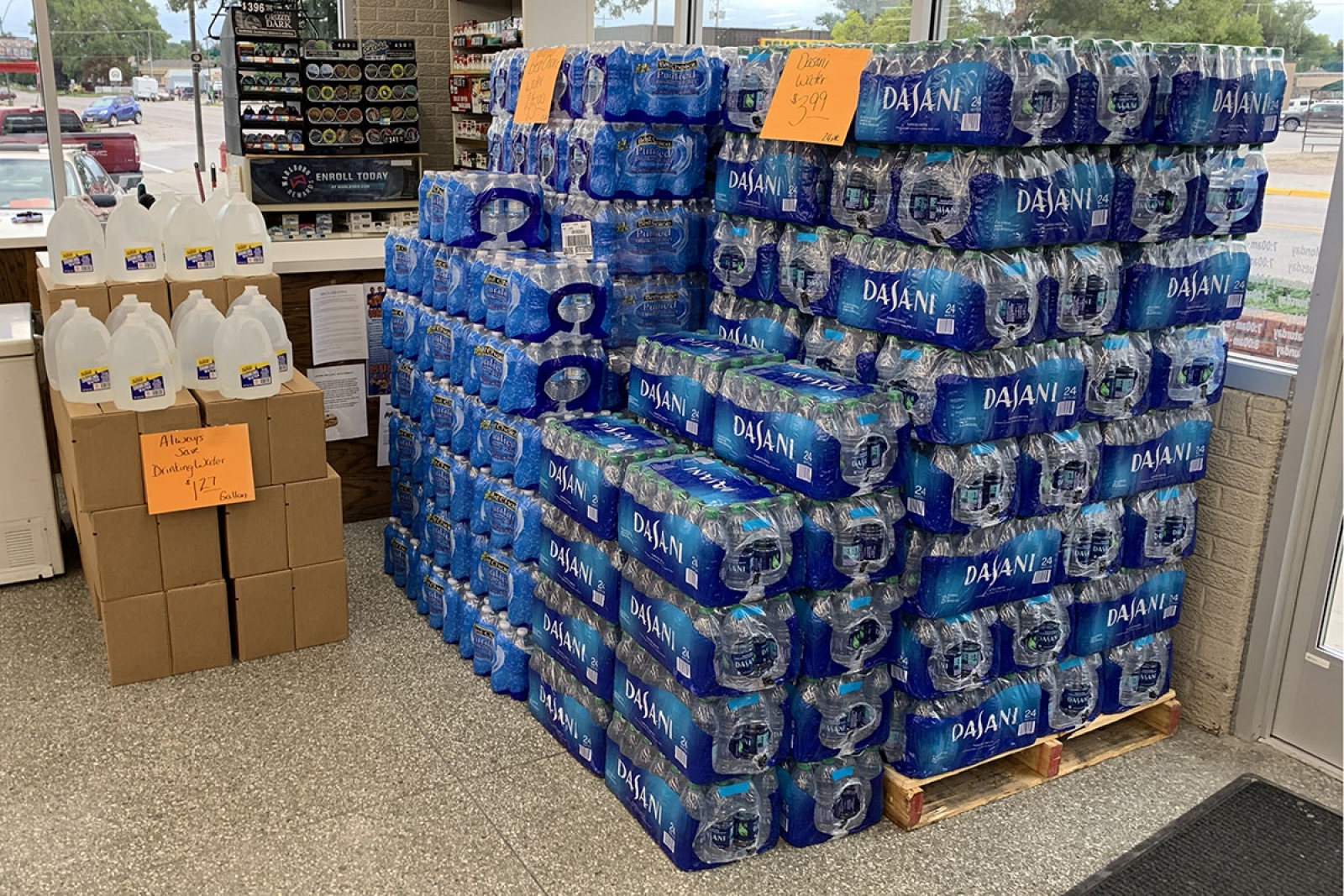 Pallets of water sit at Grocery Mart in Gordon to help cover the demand from the Boil Water Notice.
Updated August 30 to include new test information from Glen Spaugh and comments from Drinking Water Specialist Andy Kahle

Residents of Gordon were shocked to learn Wednesday afternoon that their drinking water had been contaminated with E. coli bacteria. An urgent notice posted to the city’s Facebook page warned the public that its public water system had violated microbiological standards after the E. coli bacteria was detected in its distribution system during the month of August 2019.

The notice warns that the water should not be consumed unless boiled for at least a minute first. “Boiled or bottled water should be used for drinking, making ice, brushing teeth, washing dishes, and food preparation until further notice,” it continues.

According to City Manager Glen Spaugh, “The City of Gordon took samples at two locations on August 19, 2019. One of those locations indicated the presence of E Coli in the water and the other site had Coliform. According to State DHHS regulations, the results required a second sampling at the same sites. Any combination of E. coli positive samples and total coliform positive samples in routine and repeat coliform samples triggers an acute violation. In our situation, there was an E. coli positive routine sample, followed by total coliform positive repeat samples. This resulted in the Boil Water Notice being communicated to the public through phone calls, media and the hand delivery of fliers to each user location.”

“As far as the steps going forward, due to the Labor Day holiday and the Post Office, as well as State offices being closed on Monday, we will be taking five (5) samples on Tuesday and five (5) samples on Wednesday. There needs to be a total of ten (10) clean samples for the Boil Water restriction to be lifted. We are tentatively looking at Friday, September 6 before we can make such a declaration,” Spaugh concluded.

In a release Friday morning, Spaugh stated that the city has taken samples from the wells south of town, and that the tests were all negative. “We are hoping to lift the boil water restriction by next Friday, but ALL samples need to come back negative,” he stressed. “We have followed all the steps required by the State of Nebraska. It was their determination, after the second set of samples, to initiate the Boil Water Notice. We appreciate your patience, it is a difficult process for all of us, but we will press on!”

Andy Kahle, Drinking Water Program Specialist, Nebraska Department of Health and Human Services, said the city has begun chlorinating the water system to help treat the situation. Kahle noted that tests both upstream and downstream of the positive test site came back negative. He stressed that the primary concern with the bacteria is ingestion and that if you don’t have access to boiled or bottled water, you should still continue to bathe and wash your hands regularly, while using caution, as abstaining from these activities can pose a greater health risk.

“E. coli are bacteria whose presence indicates that the water may be contaminated with human or animal wastes,” the city’s notice reads. “Human pathogens in these waters can cause short term effects, such as diarrhea, cramps, nausea, headaches, or other symptoms. They may pose a special health risk for infants, young children, some of the elderly, and people with severely compromised immune systems. The symptoms above are not caused only by organisms in drinking water. If you experience any of these symptoms and they persist, you may want to seek medical advice. People at increased risk should seek advice from health care providers about their drinking water.”

The city is still not sure how the bacteria entered the system, but the notice notes that the cause could be excessive water runoff from heavy rains entering the water source, a break in the distribution system or a failure in the water treatment process. The city is currently working to identify the problem and continues to test and work with the Drinking Water Program to identify the source and bring the system back to compliance.

According to the New Hampshire Department of Environmental Services, dishwashers can be used only if they have a sanitizing cycle. If not, wash your dishes as normal, then immerse the dishes for at least one minute in lukewarm water to which a tablespoon of bleach per gallon of water has been added. Allow the dishes to completely air dry. Hands should be washed with soap using either boiled or bottled water. Alcohol-based hand sanitizer can also be used. Adults may continue to shower as long as no water is swallowed. Sponge baths are recommended for children using a clean supply of water if possible. After you bathe or shower, wash your hands in chlorinated or bottled/boiled water. People with open wounds or who are immune-compromised should avoid showering in contaminated tap water.

The DES also notes that coffee makers, ice machines, and soda dispensers should not be used, and that fridge filters are generally not designed to remove the bacteria. While pets are not normally affected by the same diseases as humans, caution suggests giving pets pre-boiled or bottled water. They do note that, “E. coli is a sub-group of the fecal coliform bacteria group present in humans. Most E. coli, are harmless, but some can cause illness. E. coli outbreaks receive much media coverage. Most outbreaks have been related to food contamination (not water) caused by a specific strain of E. coli known as E. coli O157:H7. When a drinking water sample is reported as “E. coli positive,” it does not mean that this specific strain is present and in fact, it is probably not present. However, it does indicate recent fecal contamination. Boiling or treating contaminated drinking water with a disinfectant destroys all forms of E. coli, including O157:H7.”

The notice has already had significant effects on the community, with local schools notifying parents to please only send children with bottled or boiled water. The schools have also switched to paper products in the cafeteria to ensure student safety. Gordon Memorial Hospital and Gordon Countryside Care have implemented their emergency measures, switching to sanitary water reserves kept on hand for just such an occasion. Butler’s Daylight donuts has notified customers that they will have to close until they know the water is safe to use again. “We do not want to risk the health of our employees or our customers. We look forward to serving you again once it is safe,” their Facebook page reads. The Coffee Nook in Gordon has also been forced to close.

Local grocery stores and other retailers sold out of cases of bottled water within hours of the announcement Wednesday afternoon. Tony Meyer, owner of Grocery Mart, says he had to order extra pallets of water to help keep up with the demand.