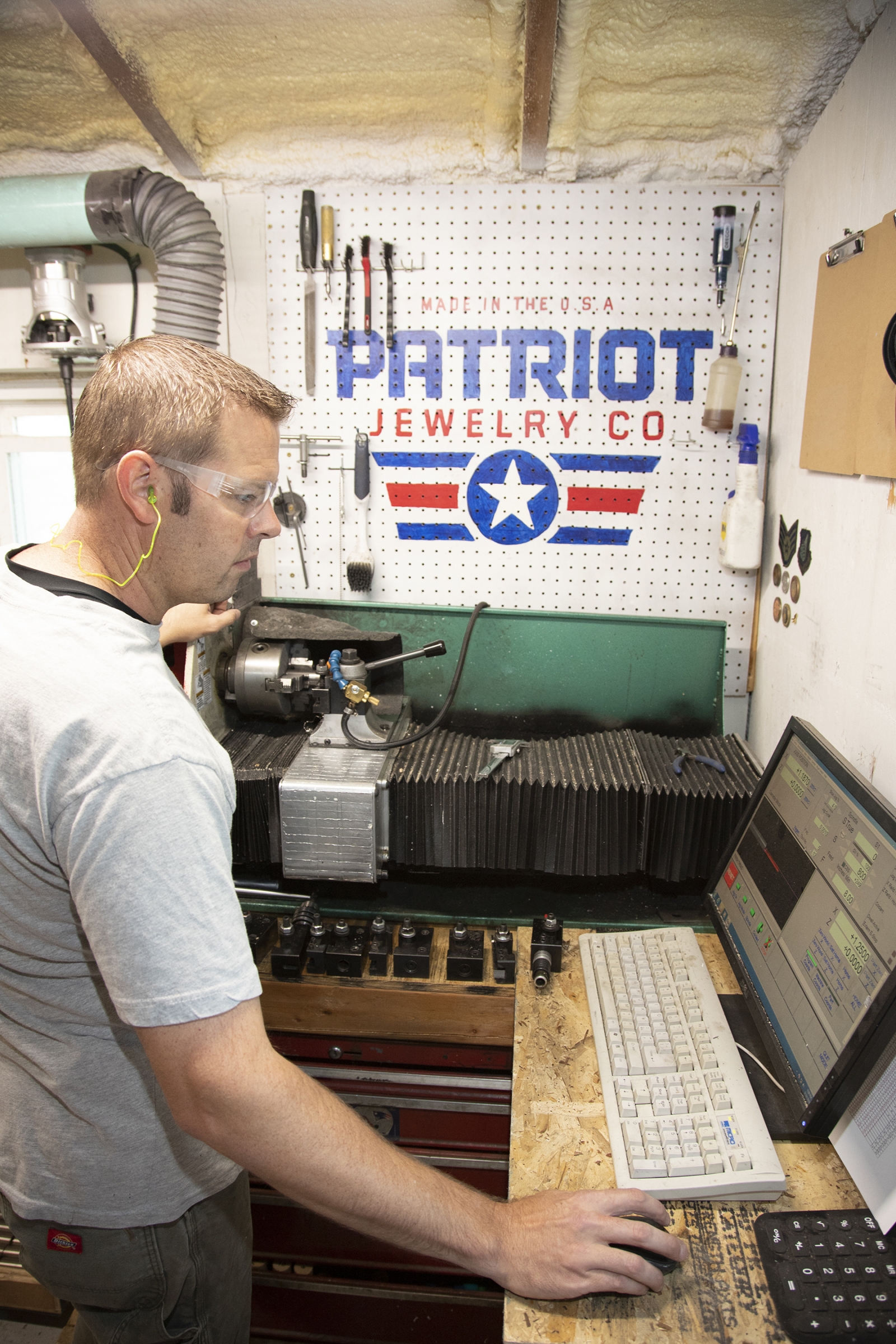 Jason Olsen stands at his computer as his custom-built machine engraves a ring. Photo by Roxane Gatewood

Sheridan County has a rich history of skilled craftsmen and women. One of the recent additions to that list is Jason Venture Olsen, maker of custom carbon fiber and titanium rings.

Olsen made his first ring in 2001 while serving in the military as a machinist. A friend was getting married and asked Olsen if he would be able to fabricate him a ring from titanium. Olsen already had all the tools necessary for the task, so he decided to give it a try.

He liked the end result so much that he decided to make his own wedding ring. Pretty soon, others were asking about the rings and how they could get one. Olsen realized he was onto something and decided to start his own business, Venture Custom Shop, fabricating custom rings.

Olsen started with a small lathe that was given to him and turned it into his own CNC machine. “Just threw it together with wires hanging out everywhere - just a proof of concept. It worked so well, I just kept using it and using it. Probably made $150,000 off of that machine,” Olsen said.

He recently built a new machine that took a significant amount of engineering. There isn’t anything available even close to what Olsen needed, and the ones you can buy are extremely large and cost around $75,000, so he decided to start from scratch and tailor it to his needs. In the end, his custom machine only cost him $5,000 and works better for him than anything else could.

In addition to titanium, he also began experimenting with carbon fiber about 6 years ago. He had bought a new bike, but when it arrived, the frame was broken. After doing some research, Olsen found that the best repair was to use carbon fiber. The material worked great and he decided to try and make rings out of the leftovers. The rings were a hit, so he decided to start up an Etsy store for them. His best seller was thin blue line rings, which show support for law enforcement officers. While the carbon fiber is extremely light and durable, it is not indestructible. Olsen has already had people wear out a few of the rings, so he is really focusing on titanium now. “I really like the titanium rings better. I can get more detail and have more fun with those, and they hold up better. Some people are a little hard on carbon fiber and it can wear out over time. You’re not going to wear out a titanium ring.”

The company started as a side project while Olsen was working an oilfield job, but when the oil recession hit and he found himself without a full-time job, he was able to transition into the ring business full time. He averages about 300 rings per year now.

Olsen still winds his own carbon fiber, although now he has a machine for the task to cut down on flaws in the material. He buys his titanium in bars that he then cuts down and turns into blanks. He has over 100 different designs now and each one has it’s own program that he must keep at the ready. All of the detail work is done using his custom CNC machine to ensure that all of the meticulous work is repeatable and the customer gets exactly what they expect.

Through his 20 years of work as a machinist, Olsen learned that Sandvik Coromant tools were the best he could get for the job. He gets his engraving bits from a company in Oregon that offers resharpening, as bits only last for a few rings when cutting advanced materials like carbon fiber and titanium.

In addition to his Etsy site etsy.com/shop/venturecustomshop, Olsen also sells his products through a wholesaler at titaniumbuzz.com, one of the pioneers of the titanium and carbon fiber jewelry market. He is also working on a site for his new sub-brand, Patriot Jewelry Company, which will feature 20-30 exclusive titanium designs. “Everybody is kind of going for a look, and I’ve figured out how to get that look,” Olsen stated.

Olsen’s rings feature designs inspired by sports, automotive, science fiction, first responders and much more, and he offers custom designs to make sure everyone can get exactly what they’re looking for.