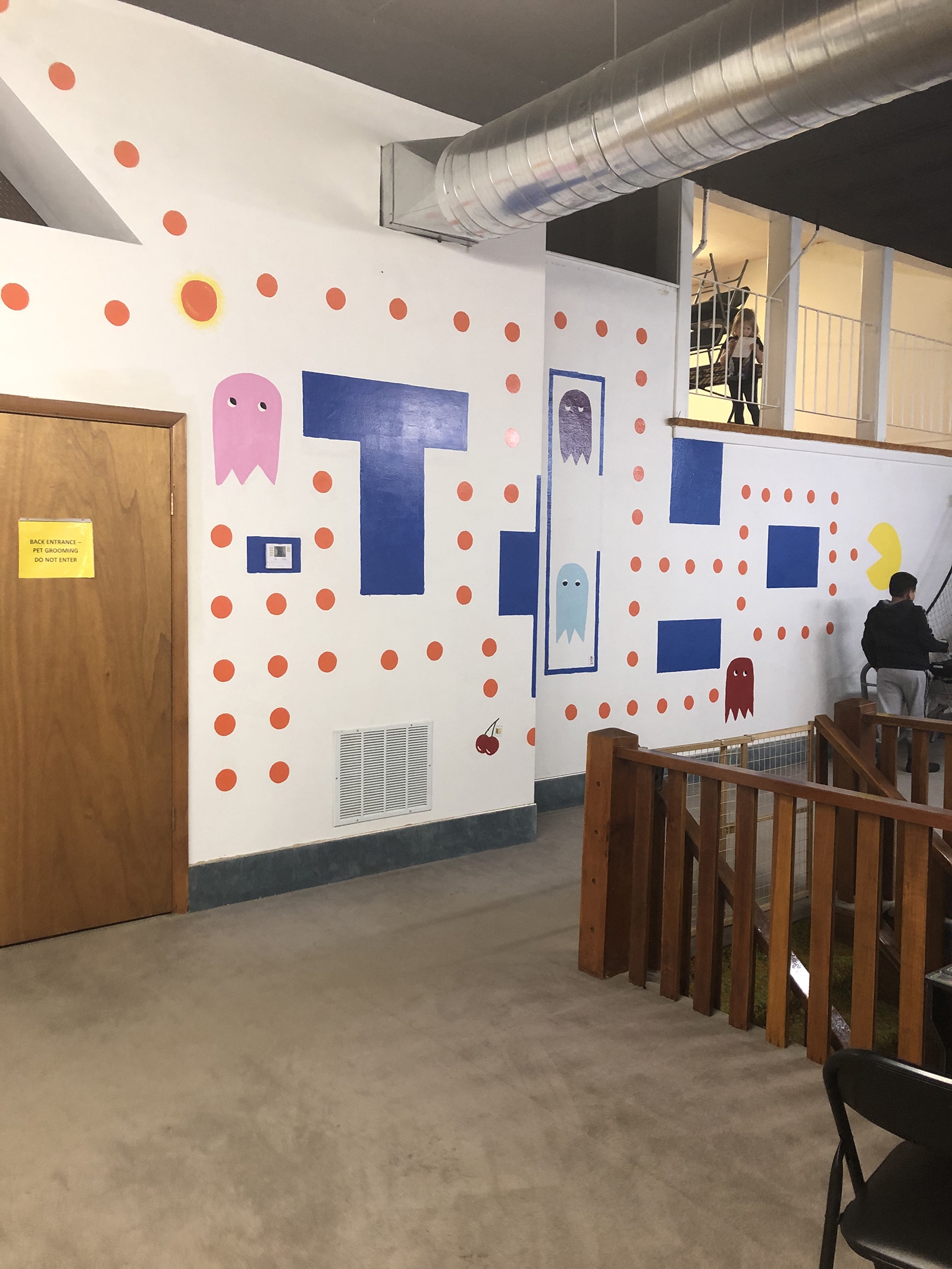 A Pac-Man mural decorates a wall at the new Joe's Games in Gordon. Photo by Rachael Huether

On December 3, Joe’s Games opened their doors to the public. Walking in the door, you are greeted by a bright, friendly environment, one that you could have only dreamed of in your childhood. Colorful paintings of video game characters line every wall, surrounding a classic gaming center with the likes of Sega and Nintendo, arcade game cabinets, and sports-related games such as pool, foosball, and air hockey. Joe’s Wireless is also set up in this store, where you can get the same friendly and knowledgeable customer service you came to know at his store just down the street.

What started as a mere dream for Gordon residents and friends Brian Reinholz and Joe Patriluck a short time ago, has quickly become their reality. “I first got this crazy idea with Joe maybe three to four months ago, that we were only thinking about it. I thought maybe sometime in the next few years we would buy a commercial building in town, and then I happened to see the for sale sign on this building,” Brian said. “The layout was really ideal here, we don’t have to build walls or change the whole layout.” By the time he reached out to the current owners, Lee and Luella Deines, the building was already under contract. After finding out who purchased the building, a plan was set into motion to lease the commercial area, while the owner remodels the upstairs apartments.

“I think a lot of it was we’re buddies, and I was sitting on his porch. At first we were looking at investments for him, and I said what I’d like to do is a game store. And then next time we met he was like ‘Hey, tell me more about that!’” Joe laughed. “Brian warned me, ‘When I get on to something, I usually roll with it, so how willing are you to roll with it?’”

Brian has lived in Gordon for a little over three years, after moving from Colorado with his wife, Sarah, and their three young children. Joe also has three young daughters with his wife, Kari. Having young children, they quickly realized how little there is to do in the community for kids outside of school, in the winter especially. “People seem to be really excited about it, just to have a community space here,” Brian added. He also feels strongly about their loft, where they have more of a collectible, hobby, and comic book type area. “Those communities become a lifeline to a lot of people that might be a little bit socially awkward. But they have a place where they’re safe, and they are exposed to other people and they are playing together, and that’s a good thing for society. You don’t want people isolated and depressed and hopeless. Even if you’re a little nerdy and awkward you need friends just like everyone else.”

“I have to step back and say this was October when we first started looking at a property. Turn around  from inception to open was maybe three-four months,” Joe said. “We had a lot of locals that bought into the vision. All the paintings were done by Sarah and two to three other couples, and I’m guessing 80-90 man hours. And they still won’t let us pay them.”

“I walked in here one time and was chatting, and said ‘You know, I had a vision and a dream to do this place. Of course you do. And I walked in and this is bigger than the dream. This is bigger than the vision.’ People got on board and believed in us and what this place could be, and made it better than what I could have dreamed. Which is pretty amazing because a lot of the Gordon community supported that. So, yes, this is our business and we want it to not flop, but we also wanted this to be a light to the community, because the community was a light to us putting it in,” Joe added.

You can visit Joe’s Games at 204 N. Main Street in Gordon for yourself to see all of the amazing things they have to offer Tuesday through Saturday from 10:00 a.m. to 6:00 p.m. Their gaming section is open until 10:00 p.m. on Friday nights during Friday Night Magic. Activities include pool, ping pong, foosball, basketball, air hockey, arcade games, retro video games, board and card games, and games for toddlers. They also offer retail products such as Magic: The Gathering, Pokemon TCG, TCG accessories, board games, and snacks. You can free play for $2 per hour, or sign up for a monthly membership: $11 for an individual, one adult and one child $13, two adults and two children $22 and $5 per additional child.