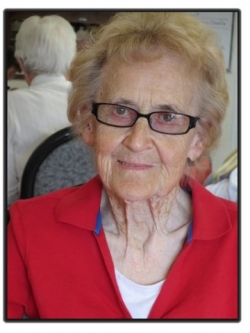 Marybell was born on December 17, 1927, at home, to Herman and Isabell (Lehman) Wellnitz. She passed away August 20, 2019, at Pioneer Manor Nursing Home. Marybell grew up helping her father driving teams and planting crops. She walked or rode her horse Snip to grade school every day. When Marybell was in 6th grade, Clayton Tallon was starting 1st grade. The teacher would lift Clayton up and he would ride behind Marybell to the Comer hill, slide off and go the rest of the way home. After school, Marybell would help her mother bake and make butter in the large wooden churn.

She graduated from Rushville High School.  After graduation she received her teaching certificate and taught area country schools, and during the summer she returned home to help her father in the fields and care for her mother.

She married Doyle Johnson on January 23, 1949, in the aftermath of the ‘49 Blizzard. To this union five children were born Rodney, Douglas, Carol, Larry and Rhoda.

Marybell and Doyle continued to farm the family farm, raising their four children and one grandchild. Marybell worked hard in her home and yard (you should see the skeletons of mowers and weed eaters she wore out)! She loved to crochet doilies, make beautiful crosses and bake goodies for family, friends and neighbors. Every year she had a huge garden with an enormous amount of produce. She was a member of the United Methodist Church, Extension Club, Does, Women’s Club and the American Legion Auxiliary.

Funeral Services for Mary Isabell Johnson, 91, of Rushville, Nebraska, were held Saturday, August 24, 2019, at 2:00 p.m. at the Morse Memorial Methodist Church in Rushville, Neb., with Pastor Paul Smith officiating. Interment was held in the Fairview Cemetery in Rushville, Neb.

A memorial has been established for the Pioneer Manor Nursing Home and donations may be sent to Chamberlain-Pier Funeral Home, PO Box 366 Gordon, NE 69343.