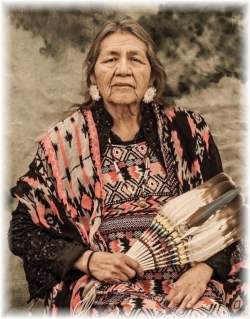 Carol was born Karen Kay High Hawk to Abel Iron Rope Sr. and Vera High Hawk in Scottsbluff, Nebraska, where her parents were working in the potato fields at the time. She grew up in Alliance, Nebraska with her siblings: Rita, Edwin, Crystal, Abel Jr., Darlene, Peter, and Sandor. She worked the fields hauling bales, harvesting and sorting potatoes, and working in the fields of beets and beans. She met the love of her life (and sometimes the bane of her existence—laugh) Tillo Herrera with whom she lovingly raised three children. She worked the fields with her family, Tillo, Woniya, Anpo, adopted son Cesar Del Toro, her brothers and sisters, as well as many others who came into her life to share some of the work and wealth. She made many friends along the way including a farmer who became a close friend of the family, Alan Weinhold of Gering, Neb. (now Scottsbluff, Neb.). She later decided to return to school since she never graduated high school and knew the importance of education. She acquired her GED then acquired her Bachelor’s degree from Chadron State College. She took a class trip to Paris, France, and its surrounding countries which was a highlight of that quest. She furthered her education even more by acquiring her Master’s Degree, as well. In 1989, she added Mary Ann (Lovejoy) Herrera to the family who brought her joy every day of her life. She worked many different positions in the social work field and was an advocate for developmentally disabled children as well as the Indian Child Welfare Act. She worked as an independent contractor and was a guest speaker at numerous conferences and retreats across the United States educating people in cultural competency, Lakota Culture and Values, Lakota Parenting, and spiritual healing. She worked for the Pine Ridge OST Public Safety Department and helped to bring healing to many officers who struggled with the traumas they witnessed in the process of their duties. She also worked for the Casey Family Program and taught Lakota Parenting classes to parents wanting to become better parents and/or regain custody of their children. She helped a lot of families reunite and become better parents. She spoke on Kili Radio Station weekly during her Lakota Parenting Program. She also had an integral part in the Womanhood Ceremonies for young Lakota girls who had come of age by educating them in the culture and expectations of being a good Lakota woman. She made a lot of friends and hunka family while on this Earth who, along with her relatives, will miss her smile, sense of humor, wisdom, respectful and loving nature, as well as many other qualities.

Carol was a third generation Native American Church member of our blood line and an avid believer and participant of our way of life. She comes from a long line of Chiefs- Chief High Hawk, Chief Lone Bear and Chief Iron Nation.