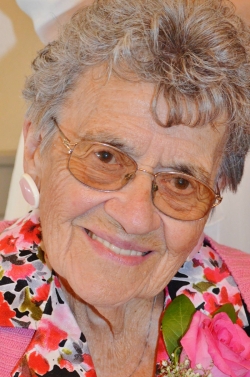 Ruth Margurite Flueckinger Spillman, affectionately known as “Grandma Rocket”, passed away in South Jordan, Utah, at the age of 97, on September 23, after having lived a life dedicated the Lord and her family.

She rejoined her husband, Merle, whom she has missed for the past 47 years.

Ruth was born in Rushville, Nebraska, on February 10, 1922, to Walter and Esther Flueckinger.  She was the second child of six, grew up on a farm and graduated from Hay Springs High School, where she played the trombone in the school marching band.

She met Merle at a church function as a teen. Years later, they rekindled their friendship, fell in love and married in 1942.  After Merle came home from serving his country during World War II, they started their family that grew to include 11 children.

In 1956, they moved their growing family to Wendover, Utah, where Merle took a job as an electrician.  In later years, Ruth especially enjoyed her time working at the U.S. Post Office and the Utah Port of Entry until the age of 75.  Ruth was always known for her easy going attitude, her sense of adventure, quick wit and honesty.  She had an acceptance of everyone.

What a great life she lived and legacy she left.