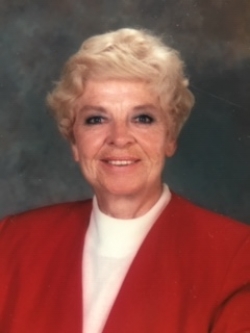 Bobbie Ross passed away at home on November 13, 2019.  Bobbie was born in Chadron on March 29, 1931, to Floyd and Matilda (Norman) Nance.  Bobbie grew up in Crawford and graduated from Colorado Women’s College in Denver and the University of WY, then taught school in Crawford before marrying her childhood sweetheart, Bob Ross, on July 25, 1953, in Honolulu.

After Bob’s Navy service in Hawaii and Oregon, they returned to Nebraska to raise a family.  Over the years, Bobbie served on the Chadron State Foundation Board and was active with Friends of the Library.  Her greatest joy was found on the golf course, where she was a local and regional champion, and was proud of her hole-in-one at Ridgeview Country Club.  She loved spending time with her grandchildren and most recently, her great grandchildren.

At her request, no services are planned.  Donations can be made to either Friends of the Library or the ALS Foundation in care of Chamberlain Chapel, PO Box 970, Chadron, NE 69337.  Online condolences can be made at www.chamberlainchapel.com.