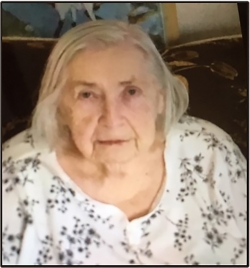 Dorothy A Evans, 90, died December 3, 2019, at Gordon Memorial Hospital. Dorothy, the second of seven children, was born May 8, 1929, to Adolph J and Albina E (Koupal) Novotny at home near Tabor, South Dakota. Dorothy’s family moved frequently during childhood including stops in Martin, S.D., and Gordon, Neb. In 1942, the family moved again to a farm near Batesland, S.D., where she graduated from Baron School in 1943.

Dorothy stayed in the Bennett County area working for various families before marrying James Evans on December 2, 1950. After marrying, Dorothy lived in various places while James served in the US Navy. To this union three girls were born, Evelyn, Barbara and Susan. In 1956, they settled in Kadoka, S.D., for a short time and then moved to Martin, S.D., in 1960. After a few years, Dorothy and James moved to Gordon, Neb., where they lived the rest of their lives.

Dorothy was a housewife until the girls were in school, at which time she worked as a custodian for the telephone company and US Postal Service, and later as a cook at the Gordon Public Schools. Dorothy spent many hours with a paintbrush in hand painting and selling pictures, gardening and tending to her animals of all sorts; but mostly she enjoyed her family and all the times we gathered together.

A memorial has been established and donations may be sent in care of Chamberlain-Pier Funeral Home, PO Box 366 Gordon, NE 69343.