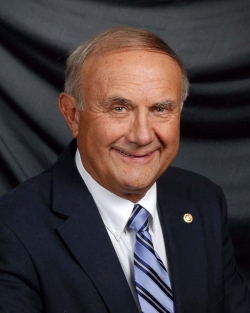 Don grew up in Hay Springs, Neb., on the family farm and graduated from Hay Springs High School in 1961. He earned his Bachelor of Science degree from Dana College in Blair, Neb., in 1965 and his Doctor of Veterinary Medicine from Colorado State University in Fort Collins in 1969.

Don embarked on a lifelong career of caring for animals, always cultivating enduring friendships with their owners and his staff.  After working in Denver for two years, he came to Longmont and became a partner at the Animal Hospital, where he practiced for 48 years until shortly before his passing.

He became a member of First Evangelical Lutheran Church in 1971, and served in various capacities over the years. He shared the talent of his beautiful voice in the Chancel Choir and special services. In 1972, Don joined the Rotary Club of Longmont, as he felt strongly in its purpose of providing humanitarian service around the world. He served on their Board, and those of the St. Vrain Music Association, Colorado-Chernobyl Health Alliance, Longmont Humane Society, Longs Peak Veterinary Medical Association, Longmont Symphony Orchestra, and was a member of Colorado and American Veterinary Medical Associations.

Throughout his career and partial retirement, Don spent as much time as he could at the family farm and mountain cabin. He was an avid reader, especially books about WWII, history, investing, politics, and he read his many magazines cover to cover.  He followed college sports, most especially Nebraska Cornhuskers football.  Don and Leslie shared their love of classical music and were longtime supporters of Longmont and Boulder Symphonies. Don had little use for the computer age, but being able to check the “ranch rain” numerous times daily brought him great satisfaction. He didn’t google, he went straight to his 1988 World Book Encyclopedias. He was passionate about his family farm, planting trees by the thousands, keeping up the paint and repairs and reflecting during long, early morning walks. He was dedicated to honoring the legacies of his forefathers and strove to preserve the fields, farms, streams, and mountains for future generations.

Don will be remembered for his kindness, gentle manner and interest in the lives of everyone he met and knew. His ready smile conveyed an abiding geniality and his handshake, an affirmation of trust. He treated people and animals with respect and compassion. His friends and family know him as a lifelong environmentalist, ardent recycler, and a champion of social consciousness. He leaves a legacy of honesty, humility and hard work for his children and grandchildren.

Don was preceded in death by his parents Paul Martin and Blanche Carolyn Dreyer, his wife Myra Jo Rose and his brother-in-law J. Conrad Bauer.

Don is survived by his wife, Leslie of Longmont; his son and daughter-in-law, Jay and Kristin Dreyer of Manning, Iowa; his son and daughter-in-law, Lee and Megan Dreyer of Lincoln, Neb.; Leslie’s children, Krystal Winship Erazo and her husband Edison of Longmont; John Winship and his wife Shelby of Johnstown, Colo.;  his sister Ruth Bauer of Wray, Colo.; his adoring grandchildren Quentin Dreyer and Eli Dreyer of Manning, Miles Dreyer and Max Dreyer of Lincoln, Kamila Erazo and Josep Erazo of Longmont, and Madison Jo Winship of Johnstown. He is further survived by his 12 nieces and nephews with 14 great-nieces and nephews, his mother-in-law Anabel Rose, sister-in-law and her husband, Deborah and Allan Guse, and revered extended family. He leaves behind many treasured friends and his adored cat, Sofee.

Visitation were Tuesday, December 17, 2019, from 4- 6 p.m. at Ahlberg Funeral Chapel at 326 Terry St. Longmont, Colo. The funeral service were Wednesday, December 18, 2019, at 11 a.m. followed by a reception at First Evangelical Lutheran Church at 803 3rd Ave. Longmont, Colo. A graveside service will take place on Friday, December 20, 2019, at 10:00 in Hay Springs, Neb., at Pine Knoll Cemetery at the Dreyer Ranch.  A luncheon will follow at Immanuel Lutheran Church in Rushville.

The family would like to give special thanks to Don’s medical providers Kaiser Permanente, Sarah Cannon Research Institute, and TRU Community Care.

Memorial donations are suggested to First Evangelical Lutheran Church or Habitat for Humanity of the St. Vrain Valley and may be made through Ahlberg Funeral Chapel, 326 Terry St, Longmont, CO 80501.