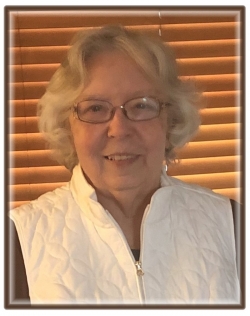 Roxie Ann Brown was born October 31, 1947, in Alliance, Nebraska, to Reid Earl McCoy and Margaret Elizabeth (Walts) McCoy. She passed away January 3, 2020, at her home in Rushville, Nebraska.

Roxie married LaVern Roy Brown at the Presbyterian Church in Rushville, Nebraska, on June 12, 1965, and spent 54 wonderful years together and they raised three girls, Bonnie, Mary and Brenda. She had four grandchildren that were her pride and joy, Michael and Steven Hamm and Allison and Katelyn Hamre.

She was a registered nurse and worked at the Pine Ridge Hospital for 22 years, and after retiring for a short time she returned to work at the Rushville Nursing Home for four years before retiring a final time. She enjoyed making cards, visiting her children and grandchildren, as well as traveling with her husband Vern.

Roxie was preceded in death by her father Reid, her mother Margaret and her brother Steve.

The family suggests memorials to the American Heart Association or the Diabetes Foundation and donations may be sent in care of Chamberlain-Pier Funeral Home, PO Box 366, Gordon, NE 69343.