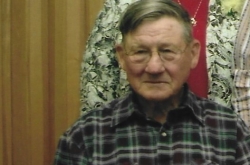 Warren Edwin Scherbarth was born September 30, 1931, in Sheridan County, Nebraska, and passed away on June 28, 2020, at Pioneer Manor in Hay Springs, Nebraska, at the age of 88 years and 9 months.

Warren was born to Richard C. and Evelyn E. (Philips) Scherbarth. He grew up on the farm west of Hay Springs, where he resided until his health declined.

Warren grew up on this farm helping his parents and working out at neighboring farms. He went to country school until eighth grade then to Hay Springs High School, graduating in 1949.

Later on they moved to Hay Springs area working on neighboring farms. Finally settling west of Hay Springs on the home place.

To this union of marriage six children were born: Robert, Suzan Scherbarth Smith, Stephen, Brian, Janene Scherbarth Odell, and Craig. They were married for 65 years.

Warren was a member of Zion Lutheran Church, where he and Betty attended and raised their children.

He is preceded in death by his wife Betty, parents, two brothers, four sisters, one grandson, and one great granddaughter.

A memorial has been established for Zion Lutheran Church. Donations may be sent Chamberlain-Drabbels Mortuary, PO Box 443, Hay Springs, NE 69347.

Online condolences can be made at www.chamberlainchapel.com

Chamberlain-Drabbels Mortuary of Hay Springs, Nebraska, is in charge of arrangements.