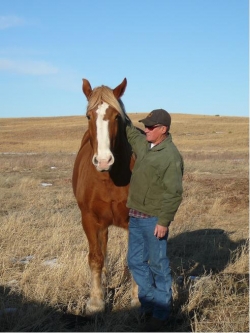 On September 19, 2020, Clyde Lefler, Jr. of Gordon, Nebraska, passed away at age 78 with family holding his hand and praying with him. He was in hospice at his daughter’s home in Longmont, Colorado. Earlier in the day he would say hello and reach up to give a hug to his daughter-in-law. A remarkable strength and humility with which he confronted non-Hodgkin’s lymphoma would be with him until the end.

Clyde Loren Lefler, Jr. was born in Gordon, Nebraska, on September 5, 1942. Living at Modisett Ranch while his dad worked as a ranch foreman, Clyde attended country school until 8th grade. He then attended Gordon High School until he graduated at a young age of 16.

In 1967, Clyde and Billie Hale married at the Presbyterian church in Gordon. They moved to Las Vegas in their Thunderbird, where Billie attended nursing school and Clyde worked as a mechanic at the Ford garage. There they gave birth to their first child, Stephanie. In 1971, they moved to rural western Nebraska to the Waddill ranch; Clyde ranched and Billie worked as a nurse and ranchwife.

Clyde had a passion for his work and love of family and friends. He would say that he loved ranching so much that he would pay to do it. Soon after moving back, they welcomed the birth of their son, Clint. The family enjoyed hunting, fishing, camping, and water skiing. Clyde also had a love of mechanics and creating inventions. He and a young Clint built a large satellite dish from scratch. Clyde and Billie were awarded Rancher of the Year (1986 approx.) and ran a successful Bed & Breakfast for over 25 years.

He started Lefler Excavating in the 90’s to take care of his own ditches. After losing his beloved wife, Billie, in 2006, the ranch sold, and his excavation business provided work he was also passionate about. He loved his customers, who in turn trusted Clyde. There wasn’t a problem he wouldn’t tackle, and they knew it.

Clyde was an active and dedicated member of Masons, Eastern Star, Shriners, and was president of the Cattlemen’s Association.

As long-time friends and then widowers, a renewed friendship developed with Carol Metzger, which grew into a beautiful relationship with many shared interests. Clyde loved to bowl, ride his motorcycle, play cards, travel, speak in spoonerisms, and make others laugh. He was a kind person who would do anything for anyone.

Clyde is preceded in death by his parents, Clyde Sr. and Irene; wife, Billie; sister, Arlene; mother-in-law Lorraine; sister-in-law, Sharon, niece Kerri, and many aunts and uncles. He is survived by his brother, Jerry Lefler; daughter, Stephanie, and her husband Keerat Sharma; son Clint and his wife Stacie Lefler; grandson Riley Lefler; sister-in-law Vicki and Ralph Northey, many nieces, nephews and cousins.

Funeral Services were held Monday, September 28, 2020, 10:00 a.m. at Winship Park, Gordon, Neb., with burial in Gordon Cemetery. A memorial has been established for C.A.R.E. and donations may be sent in care of Chamberlain-Pier Funeral Home, PO Box 366, Gordon, NE 69343.