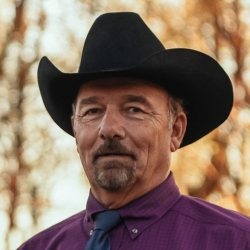 Leo was born May 30, 1954, in Wagner, South Dakota, to Arthur and Josephine (McKenna) Westendorf and was raised south of Wagner on the family farm.  He was baptized and confirmed at St. John the Baptist Catholic Church in Wagner.

He graduated from Wagner High School in 1972 where he participated in football and wrestling. He served in the National Guard from 1973 to 1979.

On January 1, 1993, he married Stacy (Jansen) Martin at the Stanley Hotel in Estes Park, Colorado. To this union two children were born: Tyson Arthur in 2000 and Danielle Ann in 2007. Stacy’s daughter Brooke Danielle also joined this family.

Leo became Feed Department Manager of Farmer’s Coop in Wagner. Leo and Stacy lived south of Ravinia for five years before moving to Gordon, Nebraska, where Leo was manager of a large feed mill for Farmer’s Co-op for the next twelve years. They lived on their 40-acre ranch west of Gordon where they raised Quarter Horses and put up hay.

In 2010, Leo moved to Winner, S.D., with the family where he took over the challenge of managing the feed department of Country Pride Coop. Leo loved the challenges and successes of working with producers. He was so proud of his employee team and was a great mentor. He made lasting friendships everywhere he went with his wit and infectious laugh. He made positive contributions throughout his life in every community he lived. Examples of this include his involvement as a member of local township boards, rodeo president, saddle club president, community development director, catechism teacher, dart champion contender, countless trail rides, and training horses. He loved walleye fishing and his 15+ years of annual Canadian fishing trips. He enjoyed golfing, snowmobiling, socializing, watching the Kansas City Chiefs and the Kansas City Royals. Most of all, he loved attending his children’s school activities, teaching them and countless others how to ride horses, and enjoying numerous motorcycle adventures with his soul mate Stacy.