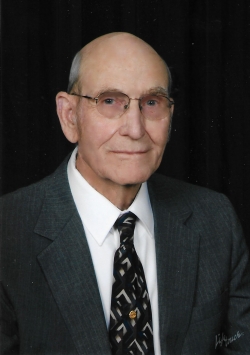 Howard Everett Rincker, age 94, passed away peacefully at Chadron Community Hospital on February 24, 2021. He was surrounded by many loving family members.

He was typically known as Howard in his business dealings but as Everett by his family and friends. Everett was born in Scottsbluff, NE., on April 11, 1926. His life started in a small tarpaper shack but it was filled with love. Everett’s mother was frequently sick so the three brothers learned to cook, clean, and do the many animal and farm chores, in the manner it was done in the “good ole days” of the dirty thirties. They all milked cows twice daily, every day, throughout their school years.

Everett started school at age four, which put him in the same grade as his older brother Bill. What started in a small country school 1/8 mile from home, ended up being an 18-mile bus rid to Huntley High School in WY. Due to milking cows, he didn’t get to attend any extra-curricular activities after school. This also meant he never milked after starting farming on his own. Everett found he was able to make more friends attending Church and their activities at Lyman, NE. The good news is one of his best friends was Lola DeBoer. Their friendship was sidetracked for a bit when Everett joined the Army in October 1944. He traveled through Scotland, England, France, Belgium, Holland, and Germany where he witnessed terrible destruction. Lola wrote him many letters while he was in the Service. He was discharged in August 1946 and married the love of his life, Lola, on December 21, 1947.

Everett and Lola farmed in Lyman until they drew Unit 116 on Mirage Flats in Nebraska. Their life in Nebraska started right after the 49 blizzard, in a small trailer with no heat, electricity, or running water. They soon built a beautiful home and adopted two children, Roger and Kathy. They put together a successful farm where they Raised their two children. They also fed cattle to use up all their idle time.

Everett served on many boards including: school, church, irrigation, telephone, bean, beet, and 30 years on the PCA Board. Everett was instrumental in getting telephone service on the Mirage Flats.

After retiring they lived in Sun City, AZ in the winter, back to the farm in summer and later moved into Prairie Pines Lodge in Chadron.

Everett carried the work ethic and thriftiness he learned growing up in the dirty thirties all his life. He was a man of strong Faith who did his best to pass his virtues on. He was a great storyteller who also listened and enjoyed a good joke. Everett was a wonderful father, husband, farmer, and friend of many. He will be greatly missed and if there ever was a man who could pass on with no regrets, it should be Everett.

We know he is finally at rest with his Maker.

More in this category: « George B. Jones Gene Snyder »