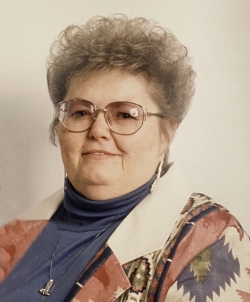 Mary Kay Lindauer, age 80, of Honeyville, Utah, and formerly of Rupert, died Thursday, March 25, 2021, surrounded by family at her son’s home in Honeyville, where she had moved to on her 80th birthday to be cared for by family.

Mary Kay was born November 13, 1940, in Gordon, Nebraska, the first of eight children born to Clara LaVern Maddox and James Joseph Leo Bermingham. She was raised on various farms in that area. She attended several county schools but Clinton Elementary was her favorite. She graduated from Gordon High School in 1959.

Mary Kay met the love of her life, Fred Lindauer, and they were married on September 10, 1966, in Rupert, Idaho. They bought a home on South Meridian Road and spent the next 54 years there. Her pride and joy was her son, Jim, and his family. Mary Kay had so much love for everyone and she became a second mom to Robert Garcia and loved him as her own.

Mary Kay worked as a clerk at the local Five and Dime store in Gordon, where she was in charge of the toys, school supplies, and record section. She always bragged about her record collection.

Her love of Chevrolet cars led her to her life’s career pursuit as a bookkeeper, working for 43 years at Chevrolet dealerships. She worked at Borman Chevrolet in Nebraska; Hanzel Motors, Don Ovitt Chevrolet, and Kim Hansen Chevrolet all of Burley, Idaho.

Mary Kay was a member of The Church of Jesus Christ of Latter-day Saints and loved to serve anyway she could. Family was everything to her and she was the glue that held them together; Mom, Aunt Mary, Kayo, Grandma, and Grandma G were some of her treasured titles.

She was preceded in death by her parents; siblings, James Charles Bermingham, Michael Bermingham, Kathryn Bermingham, and Bridget Fetzer.

The funeral will be held at 11 a.m. Friday April 9, at The Church of Jesus Christ of Latter-day Saints, Rupert 1st Ward, located at 806 G St., in Rupert. Burial will follow at Rupert Cemetery.

Friends and family will be received from 5 until 7 p.m. Thursday, April 8, at Rasmussen-Wilson Funeral Home, 1350 E. 16th St., in Burley, and one hour prior to the funeral at the church on Friday.

More in this category: « Judith A. Taylor Virginia Mae Ragsdale »