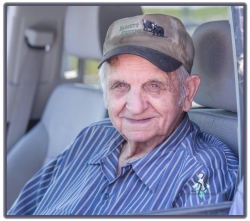 Norman Herman Schwarting, 94, went to be with his Heavenly Father on Sunday, May 2, 2021 at the Gordon Countryside Care. Norman was born May 14, 1926 in Scribner, NE to Herman and Mary Schwarting. He moved to a ranch northwest of Batesland, SD, as a baby in 1927 in a rented railroad car and lived in a chicken coop until the home on the ranch was built. Norman worked for the family as a child and graduated from Gordon High School. During his youth, Norman helped establish the Gordon and Batesland Coop Elevators and the REA lines. Norman was active with the Batesland Fire Department and attended St. Paul’s Lutheran Church. On August 30, 1948 he married his first and only love, Elouise Ballard.

After marrying, Norman and Elouise settled in a house not far from the family ranch and raised 6 children. They had a baby named Dennis who died shortly after birth in 1954. Norman’s greatest loves were his Heavenly Father, his wife Elouise, family, and his love of the ranching/farming life. Norman worked on the ranch as a young boy and continued the love of ranching/farming his entire life, never complaining about bad crops, low prices, etc... He was an amazing man and a wonderful role model for his children. The love of the ranch was instilled in them all. Two of his sons and grandsons continued the family ranch and worked side by side with him for many years. Thanksgiving was a special time for Norman and Elouise when all the children and their families gathered, the card playing was always a favorite and boy were the cards played nonstop. Norman was known for his smile, and his jokes. There was not a person he did not call friend and he always had a smile for everyone. The kids/grandkids will always remember the many silly jokes he had for them when they came to visit.

Norman and Elouise retired from the Ranch, moving to Gordon, NE in the early 90’s, although Norman never fully retired until a few years ago. He loved doing what he could on the ranch, whether it be moving cattle, keeping books/records, or preparing the boy’s lunch. Norman and Elouise were active members of the Rock of Ages Lutheran Church while in Gordon.

Norman was preceded in death by his Father Herman, his Mother Mary, his brothers Marvin, Lowell and Orville Schwarting, his sisters Darlene Rust, and Lovletta Kehn. Also, their baby Dennis and their Great Granddaughter Meadow Finch.

Norman is very loved and will be missed by all.

Funeral services were held Friday May 7, 2021 at Our Redeemer Lutheran Church, Martin, SD, and burial in the Gordon Cemetery, Gordon, NE. A memorial has been established for the Rock of Ages Lutheran Church and donations may be sent in care of Chamberlain-Pier Funeral Home, PO Box 366, Gordon, NE 69343.