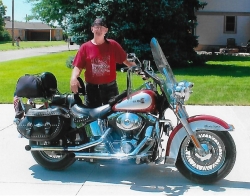 Alan Easton was born to Ernest ‘Ernie’ and Virginia ‘Jean’ Easton on October 13, 1951, in Salt Lake City, Utah. He passed from this life on January 14, 2022, at Cheyenne Regional Medical Center in Cheyenne, Wyoming.

Alan graduated in Iowa and moved to Gordon when he was 18. Alan worked at the packing plant, Jack & Jill Grocery Store, Gordon Memorial Hospital and Countryside Care. He retired in 2018.

Alan was married to Sandy Timm and the couple had two children, Kristina Easton of Gordon, and Bryan Easton of Lincoln. The couple divorced and in 2001 Alan married Kathy Barth of Gordon and they resided in Gordon. They were married for 20 years until his passing.

Alan enjoyed fishing, hunting, camping, and riding his motorcycle. Alan joined the Western Sandhills American Legion Riders in March of 2014 and was the chaplain. Alan was also a member of the Sons of the American Legion Post #34. He had many friends from work at his various jobs. He attended the Sturgis Rally with friends in the past years. Those who knew him will dearly miss him.

Alan is survived by his wife Kathy, his mother Virginia ‘Jean’ Easton of Gordon, his adopted brother Mike of Barstow, CA, daughter Kristina of Gordon, son Bryan of Lincoln, grandchildren Audrey, Dasyn and Xaley of Lincoln, Jordan Gibbons and Treyton Gibbons. Special lady Charlotte Cummings of Gordon, Delmer and Bobbi Bartels of Gering, Pat and Jim Mracek of Alliance and several nieces and nephews. He was preceded in death by his father Ernest ‘Ernie’ Easton, his mother and father-in-law, and sisters-in-law Fernola Tappan and Joella Clark.