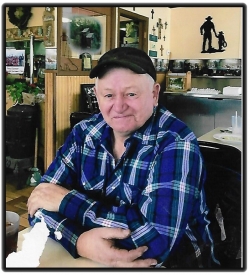 Marty Muck was born to Richard (Dick) Everett Muck and Sharon K (Hale) Muck on Dec 30, 1957. His loving parents brought Marty home to the Muck ranch south of Gordon, NE.  He loved ranching and farming. He loved the river and wildlife and all his family, neighbors, where he raised his children.  Marty was a friend to all and enjoyed going to town and calling to check on his all his neighbors.

Marty enjoyed his cattle ranching and drove Hay trucks, detailed cars with his father. They worked side by side with his mom.  He also enjoyed puzzles, and watching wildlife on the river, where the Mucks had an elk ranch and raised buffalo.  The last few years he enjoyed traveling to Colorado with his partner Pam.  He also enjoyed his loving dogs Max, Penny, Rudy, and many barn cats.

He is survived by his partner, Pam Phillips, and his children, oldest daughter Danette, his son Jason, daughter Heidi and son Jeremy, four grandchildren, Cecilia, Madison, Hunter and Joleen.  He has a brother Todd Muck, sister Khristi and a brother-in-law Troy Downey.   He has an aunt Vicky (Ralph) Northery, aunt Donna and Ron Jensen, an uncle Gary Muck, aunt Ila Mae Johnson, and many nieces, nephews and cousins of who he loved and thought a lot of.

He is preceded in death by his parents, Richard and Sharon Muck, and his grandparents and one older brother Richard Lee Muck.

The funeral service will be at 10:00 Saturday, January 2022, at the Wellspring Church in Gordon, NE. The burial will be in the Gordon Cemetery.  Pallbearers will be Bryan and Jeff Hugen, Larry Bostock, Jim Paul, Alan and Jake August.

A memorial has been established and donations may be sent to Chamberlain-Pier Funeral, PO Box 366, Gordon, NE 69343.