28 years at GMH; Larson heads into a well-deserved retirement

‘The Tent’ receives an upgrade for this year’s fireworks season 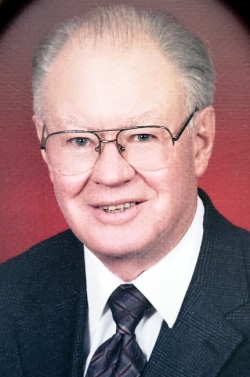 Fay was born on July 31st, 1926, to Emil and Jeanette Fuchser in Gordon, Nebraska. He grew up on a ranch in Cherry County and attended local schools. He graduated from Gordon High School in 1943. He was drafted into the US Army Air Force in 1945 and served until being honorably discharged in 1947. He graduated from the University of Nebraska with a degree in electrical engineering in 1951.

He was a polio survivor and was able to make an almost complete recovery after it was feared he might never be able to walk again.

A longtime resident of Lakewood, Colorado, Fay worked as an electrical engineer with Behrent Engineering for over 30 years. His strong work ethic and amazing attention to detail made him an outstanding engineer.

Fay married Helen Adams, on November 11, 1961. Fay and Helen went on to have 3 children, Cheryl, Keith, and Cathy. He was a longtime member of Wheat Ridge United Methodist Church.

He enjoyed spending time in his garden and took great pride in his tomato crop. His intelligence was varied and immense and he enjoyed any kind of math puzzle. He liked to watch sports, particularly baseball and University of Nebraska football. He and Helen loved to travel and visited all 50 states as well as many countries around the world. His other interests included listening to music, stamp collecting and playing cards. He had a lively sense of humor and often showed his silly side with his grandkids. He loved to attend his grandchildren’s events and rarely missed a concert or a game.

Fay was a profoundly courteous man and put the needs of others first. He always had time for friends and family and would never fail to put down the paper after work to help with homework or play catch in the yard.

He was a devoted and loving husband, father, son, brother, and grandpa.

He is survived by his wife Helen, son Keith, daughter Catherine (Mike) Brubaker, brother Troy (Becky) Fuchser and 6 grandchildren; Morgan, Nick, Adam, Hannah, Isabelle, and Justin. He was preceded in death by his parents, his brother Cleo and his daughter, Cheryl.

A memorial event will be held later in the year. In lieu of flowers, the family requests donations are made to the Two Angels Foundation at www.twoangelsfoundation.org.