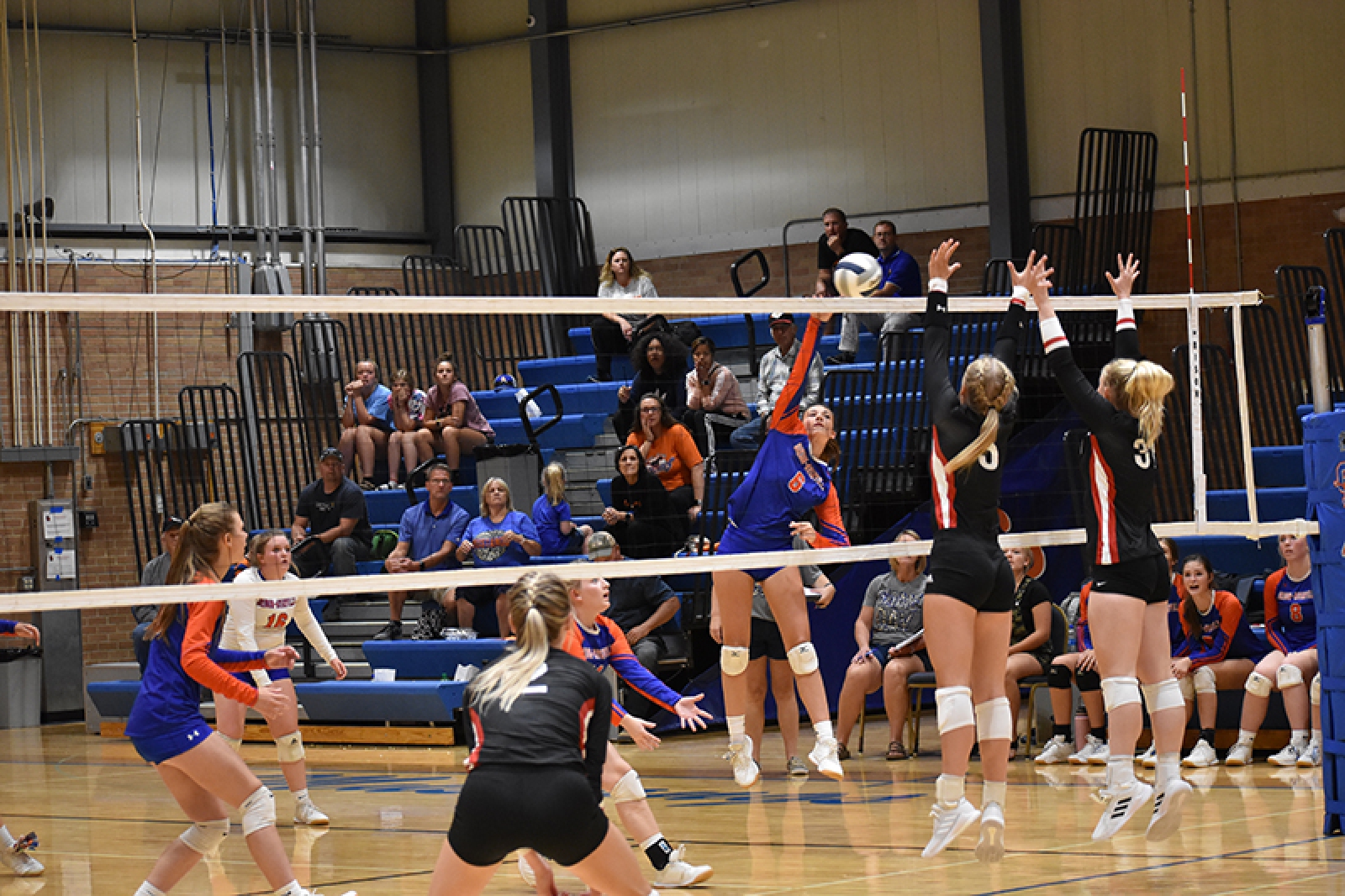 Mustang Volleyball just finished up a tough week against some of the best competition the Panhandle has to offer.

That was a tall task for the Mustangs in only their second week of the season as a lot of their underclassmen are growing up by being thrown straight into the fire.

The Mustangs finished the week without a win but many positives can be used to build the foundation for these young ladies.

“Tough week in the W-L column for sure this past week, but that is not our focus right now. Our focus is on where we want to be come October and seeing improvements from where we started and each game,” said Head Coach Kim Campbell.

The first two games of the week took place at the Mitchell Triangular on Tuesday, August 31.

The Mustangs faced off against the host Tigers from Mitchell. It was all Tigers from the beginning as they downed the Mustangs 25-12, 25-12 to sweep the match.

Sophomore McKinley Grover led the scoring for the Mustangs with 4 total kills in the match-up. Junior Reaghan Shultz tallied 3 aces and 7 digs in the loss.

The second match of the Triangular brought in the Bridgeport Bulldogs to face the Mustangs.

The two teams last met in the Sub-District Final last season with the Mustangs winning that match up.

Sophomore Skye Tausan led the hitters for G-R as she had 3 total kills.

After the two games on Tuesday, the Mustangs returned home for their first home match of the 2021 season.

The Chadron Cardinals made the trip down Highway 20 and were ready to take on the Mustangs.

The Mustangs were able to turn it around in set 3 and beat the Cardinals, 25-18. The momentum did not stay for very long with the Mustangs as the Cardinals shut the door in set 4, 25-12.

Junior AJae McKimmey led the hitting with 7 kills; sophomore Haley Johnson was right behind her with 6 kills. Senior libero Brenna Haag contributed from the service line with 3 aces.

Haag also excelled in the back row, receiving 36 total serves with only 2 errors over the 4 sets.

The Mustangs tallied 26 total kills in the match which is a season high in 2021. Things have begun to come together for this young Mustang team.

Chadron was led by their senior Tatum Bailey in the win. Bailey tallied 22 total kills in the match.

“We have a lot of heart, grit, and no quit attitude on this team and those are all strengths that are going to keep us headed with our eyes on the prize,” added Campbell.

The Mustangs will continue their work in practice this week leading up to the week’s 3 match schedule.

“We have got to focus getting our offense started off better with the pass so we are really running a lot of passing and movement drills right now. And  also have a lot of work to do with our timing and footwork with our middles,” added Campbell.

It begins on Thursday, September 9, with a road showdown with the Bayard Tigers.

The Mustangs will return home for a Triangular which will begin around 12:00 p.m. on Saturday, September 11. That tri will include the Hay Springs Hawks and Crawford Rams.

The Journal Star will have full live coverage of both games at the G-R Triangular.